"Be the kind of woman that when your feet hit the floor each morning, the devil says...."Oh crap! She's up!" Unknown

Back in April I took a class at one of my
local quilt shops to learn to make
Oriana.
I had wanted to make this quilt for some time
and could not figure out the pattern, for some reason.
I signed up for the class and then began
looking for fabric.
This part was challenging!
I finally decided on a rainbow color scheme
and began cutting strips.
During the first class I was able to figure out the pattern
and went to town after that.
My quilt top was finished before the second class.
After I finished it, I sent to to
Rebecca Grace Quilting
and asked her to work her magic on the quilting.
She returned it to me a couple of weeks ago
and it is finished!! 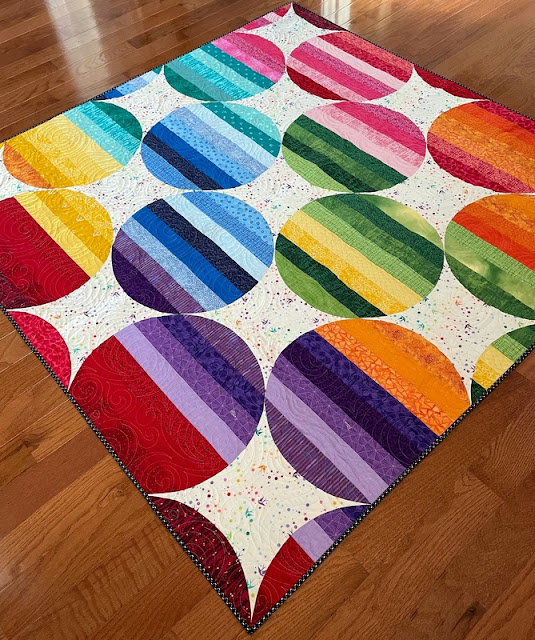 The biggest challenge for me in making this quilt
was deciding where the different colors would go. 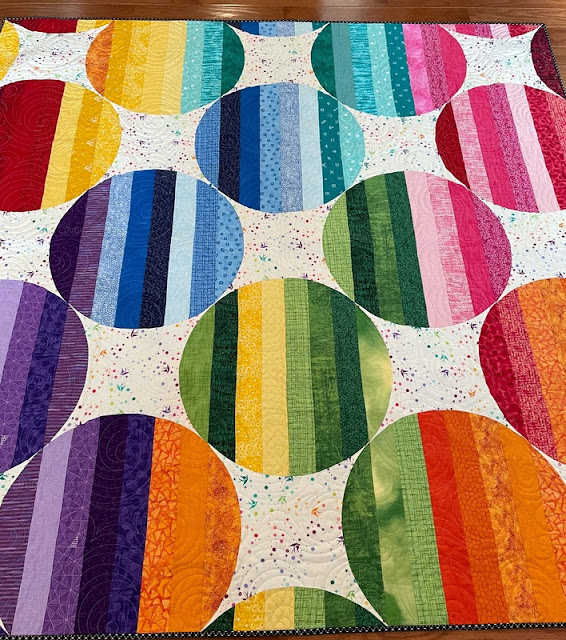 It lived on my design wall for a couple of days
and I kept going in and moving strips
until it was pleasing to my eye. 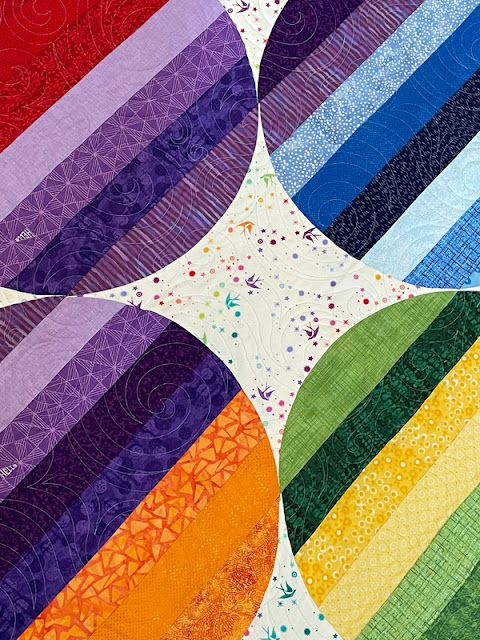 The next biggest challenge was getting the seams to match to make
the circle.
My seam ripper was called into action several times. 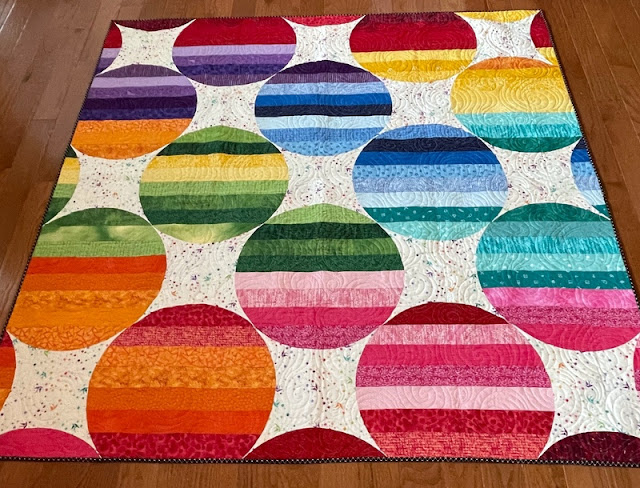 I could not be happier with Rebecca Grace's quilting!
She does such a phenomenal job in every aspect of her quilting.
With all of the different colors in this quilt,
I decided to bind it in black.
I'm excited to finally have made Oriana!
Happy Quilting!
Posted by Ramona at 10:10 AM

Wow - your color scheme and the quilt design is outstanding. It has feelings!

this is a stunning piece--I love the background you chose--just perfect with those multi-colored circle pieces...nice work on this!;))) hugs, Julierose

That is fabulous and fun!!! Love your fabric choices!

Impressive! The circles are perfect as is the background fabric. Definitely a keeper!

Ramona! Your quilt is a fantastic display of color and circles! It could be a game board too. Wonder what the rules of the game would be. It’s a wonderful rainbow quilt. That it’s been on your to-do list for awhile...CHECK!

Your Oriana quilt turned out beautifully, Ramona! I was so impressed with how you managed to get such smooth curved piecing lines with those circles. I would have been tempted to cheat and appliqué the circles onto the background! ;-). It's always a pleasure to work on your beautiful quilts.

Gorgeous! Love how the colors are pooled across the quilt.

I am so sorry if you receive inappropriate content that says it's coming from my blog. Unfortunately, undesirable people are following my blog and are sending content saying that it's from me. It is not! Blogger does not allow us to block followers through Bloglovin', so I have deleted that option from my blog for the time being. Those who have already followed me are still active, however. Again, I am so sorry. 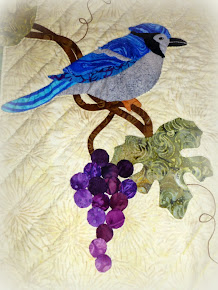 Ramona
I am blessed with a wonderful husband and two great daughters. Quilting, reading, knitting socks and traveling are my passions.